While the world continues to rely heavily on fossil fuels (petroleum, coal and gas) for power, efforts to develop more sustainable resources have caused remarkable growth in renewable energy.

This collection of recent articles from Chemical Engineering and POWER magazines presents a timely and informative overview of global efforts on many renewable energy fronts. It includes solar and wind power generation, advancements in geothermal and hydroelectric technology, and efforts to integrate such renewable sources into today’s electrical grid, such as through the use of large-scale energy storage devices. Also touched upon are bio-based renewable fuels, such as the use of biomass and waste for making solid, liquid, and gaseous fuels (including biogas), and techniques for using hydrogen as an energy carrier.

Delivered in a PDF format. 116 pages.

Section One: News and Cover Stories

Developments in redox flow batteries are moving at a tremendous pace to meet the growing need for large scale energy-storage systems, which are used for stabilizing electric power distribution

Wind Power Projects Must Be Managed as Electrical Generation Plants

Wind turbine blades, gearboxes, and generators get most of the attention both within and beyond the power industry. The focus is often on increased capacity and blade lengths, as well as drive train premature failures. That’s natural, because those rotating blades are the most visible part of a wind project. However, successful operation of a wind installation also depends on attending to the many balance-of-plant components that are less visible.

Wind Turbine Generator Maintenance: What to Expect and Why

When most of today’s wind projects were developed, first costs were the focus; operations and maintenance (O&M) costs were largely unknown. Now, with hundreds of turbine models in operation—sometimes at a single site—O&M complexity is magnified, which makes understanding common failure modes and how to prepare for handling them essential.

Everyone loves efficiencies. Combining generation technologies can create a plant that’s more than the sum of its parts, but engineering challenges mean these projects are not for the faint of heart.

New Zealand Strives to Maximize the Value of Geothermal Wastewater

Using the heat from geothermal discharge water, or brine, is just one way to maximize the value of this “waste” stream. New Zealand, a geothermal energy leader, also is pursuing mineral extraction from brine to increase overall profitability of the sector.

The Outlook for Small Hydropower in China

You can’t control the weather, but you can control how you handle the ways it affects your renewable plant. From financial hedging to accurate predictions, the tools in a plant owner’s arsenal are more capable than ever.

The 290-MW Agua Caliente Solar Project is the latest addition to the nation’s growing solar capacity and now holds the title as the largest photovoltaic plant in the world. The $1.8 billion project was completed in April 2014.

Retrofitted to the outlet of a 30-year-old reservoir, the two-stage, 53-MW, 90-turbine Ashta Hydropower Plant on the Drin River in northwest Albania is a textbook example of how innovative run-of-river hydropower projects are harnessing latent generation worldwide.

The 175-turbine London Array wind farm was built on schedule, on a scale once thought unfeasible for the emergent offshore wind sector—and despite economic headwinds of the global recession and rough weather and sea conditions. Its success has been vital for the UK, which has anchored its energy future with offshore wind power.

The 280-MW Solana Generating Station combines concentrating solar power (trough) technology with thermal energy storage, which allows the plant to operate after the sun goes down with up to a 38% annual average capacity factor. The $2 billion project began generating electricity in October 2013.

European Union carbon emission limitations and a lack of indigenous fossil fuel resources pushed Portugal in 2000 to embrace renewable energy. Today, Portugal supplies over 50% of its annual electricity demand from renewable resources, an increase of over 25% in the past five years alone. Leading Portugal’s renewable energy transformation is Alqueva II, a new pumped storage hydropower plant that supplies baseload electricity and backstops the large amount of variable wind generation in the south.

Fully commissioned in January 2013, the 420-MW Macarthur Wind Farm is the largest wind farm in the Southern Hemisphere. But sourcing and erecting 140 wind turbines for this massive project was logistically challenging and required a rethink on several levels.

When Gérard Mestrallet, chairman and CEO of GDF SUEZ, set a target of doubling the company’s renewable energy capacity from 2007 to 2013, it seemed very ambitious. Projects like the Polaniec Green Unit have helped the company reach its goal with room to spare.

The Arabian Peninsula might seem like the ideal location for a concentrating solar power plant, but developers of the 100-MW Shams 1 CSP project in the UAE—the world’s largest at its inauguration in March— found that things were nowhere near that simple.

As the largest solar plant of its type in the world, the 30-MW Alamosa Solar Project is currently enjoying its place in the sun. The innovative project consists of 504 concentrating photovoltaic (CPV) solar trackers, each featuring a CPV solar cell panel assembly mounted on a support column. The modular design of the assembly allows the project to easily accommodate future improvements in cell technology.

By taking a waste product and converting it into a fuel source, the 6.5-MW Coca-Cola/Mas Energy Facility became the first U.S. operational trigeneration project fueled by landfill gas. Since March, the new system has provided electricity, steam, and chilled water to the adjacent Coca-Cola Syrup Plant, satisfying most of the plant’s energy requirements and reducing its long-term energy costs.

Set up by the Gujarat government, the Gujarat Solar Park is actually a group of solar parks that provide dedicated common infrastructure for photovoltaic-powered projects owned and operated by numerous individual companies. When construction at all the parks is completed by the end of 2013, the Gujarat Solar Park is projected to reach a combined capacity of almost 1,000 MW, which will make it the world’s largest solar energy generation installation.

The Stillwater hybrid facility is the world’s first renewable energy project that pairs geothermal power’s baseload generation capacity with solar power’s peak capacity. Inaugurated in May, the 26-MW solar plant is integrated with the adjacent 33-MW geothermal plant, which began operations in 2009, and provides energy to run the geothermal plant’s auxiliary loads.

After nine years of construction, installation, and testing, the Three Gorges Dam is now complete. On May 23, 2012, the last main generator finished its final test, increasing the facility’s capacity to 22.5 GW and making it the world’s largest capacity hydroelectric power plant.

Officially commissioned in February 2012, the two Walney Offshore Windfarms—Walney 1 and Walney 2—together have 102 wind turbines with a total capacity of 367.2 MW. With their combined capacity, the windfarms qualify as one of the world’s largest offshore wind energy facilities and provide clean electricity to approximately 320,000 UK households.

A system to extract energy from waste gases

Alkylate process featuring a solid-acid catalyst can use multiple feedstocks

A promising process to recover Li from seawater

This coating makes glass into a solar panel

This ‘ultrabattery’ makes its commercial debut

A step forward for the bio-production of L-arginine

An inexpensive adsorbant for removing silver from wastewater

Modified MOFs could cut carbon-capture costs in half

Improving the efficiency of solar desalination

A 3-D printed polymer with enzymes turns methane to methanol

The commercial debut for a gas-to-gasoline process

The launch of a new bioethylene-production process

A new catalyst may reduce costs of catalytic converters 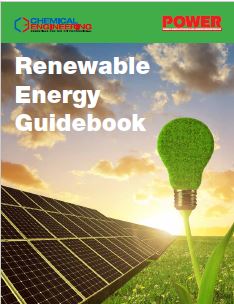